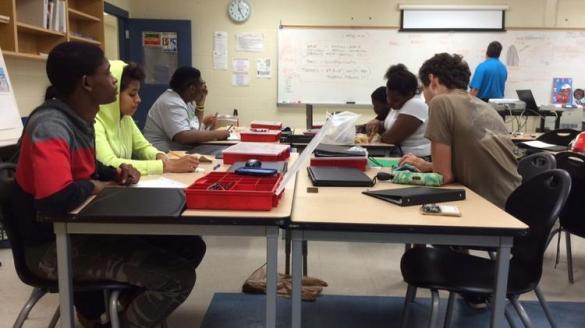 “At first, you could tell they weren’t really interested,” said Robbie Tackett, one of the five Toyota engineers who spent five days a week for the last six weeks working on technical skills with the students. “But once we got to the hands-on activities, actually connecting the circuits and doing the programming, they became more engaged.”

“More engaged” is an understated way to describe the students as they presented their final project on Friday morning to representatives from Toyota, Cincinnati Urban League and Woodward. The room fell completely silent as the lights were flipped off and the project — a machine consisting of a cluster of tiny, waving arms that moved in sync with flashing lights and computerized music — roared to life. Eleven pairs of eyes watched in rapt attention to make sure the machine did everything it was programmed to do. Eleven pairs of hands whipped out cellphones to capture their creation in action. When the lights came back on, everyone in the room broke into applause.
Read the article here.